HE DEALS WITH THINGS TO CHANGE IN ITALY AFTER OBSERVATION.

SHE EXPLAINED ABOUT OUR SPANISH CULTURE.

IT HAS TO DO ALSO WITH NON-VERBAL COMMUNICATION

IT WAS ABOUT OUR CULTURE

IT HAS TO DO WITH GESTURES IN ITALIAN.

THE THIRD MOBILITY THIS YEAR WILL BE TO GULPEN IN THE NETHERLANDS. THEY ARE LEADING THIS PROJECT.

5 STUDENTS FROM 4TH ESO WILL PARTICIPATE IN DIFFERENT CHALLENGES WHICH WILL BE CARRIED OUT IN ENTERPRISES AND ALSO SOME UNIVERSITIES.

THE 2ND MOBILITY OF THIS ERASMUS +  "I.S.P.I.P." WILL BE HELD IN FREIGERICHT, GERMANY FROM THE 27TH OF JANUARY TO THE 2ND OF FEBRUARY.


The students are from 4th ESO and 1st BachilLerato: 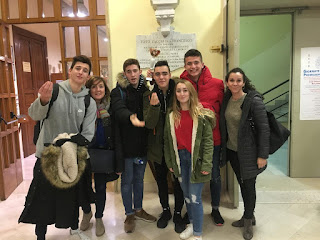 This briefing is going to report on the experience related to the Erasmus+ Project. It took place in Lecce, Italy, from the 9th to the 16th of December, 2018.
In this Project, the teachers were supposed to assist to several classes a day, doing “job shadowing”, and in the afternoon classes of Italian language would be taken. We can say that after having been in those classes in the morning, it was observed that the general standards of the classes were very high, with high student participation in making useful comments. If we made a comparison with the Spanish system, it can be seen that in Spanish classes we use much more IT resources as digital books or projectors and digital whiteboards. Nevertheless, the results are not diminished by this fact neither in both systems.
There were two days when we went to the University of Lecce. The first day we attended a very interesting talk on Marine Biology and later we were taken to a laboratory where several professors did experiments in front of us. Another day, we went to a talk given by a translator. We would like to remark that a practical approach in this type of sessions is more appealing for the students.
In the Italian classes, the situation was different. The group was made of students (Italian included) and teachers divided into 3 different classes. Taking into account the difficulty of teaching a language in so few hours, the objectives which had been established, such as making a small dialogue in Italian WERE ok.
Regarding the whole organization, the general view is that there has been a lot of interesting activities for both the students and teachers. If we were to change something, we might give more free time. We have to take into account that during a week, people get tired so a free afternoon would be a Good idea. Apart from this, in Italy, Saturday is a working day. Another possibility is having the Italian classes during the morning and thus having more free time in the afternoon.

THIS IS WHAT THE TEACHER SENDS ABOUT THE LOVELY STAY FROM THE 10TH OF DECEMBER TO THE 16TH.

THERE ARE NICE PHOTOS

Some of the students went to Universities to attend interesting lessons. They enjoyed a lot with their hosting families and also they visited the school of Cossimo di Georgi and some lessons. They were singing Christmas carols in different languages and they had a Farewell party on the last day. 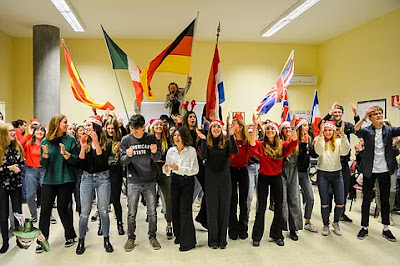 They are in first Bachillerato and they will write their own reports for this blog.
Publicado por GREEN JOBS: ERASMUS + en 11:48 No hay comentarios: